The must-see walk in Montmartre

You have booked an apartment at Montmartre Residence and you wish to organize your visits during your stay ?

With the return of summer temperatures, visiting the neighborhood on foot is undoubtedly the best way to soak up the charm of the Montmartre streets. Here is an itinerary of Montmartre which will allow you to discover the corners of the district ! 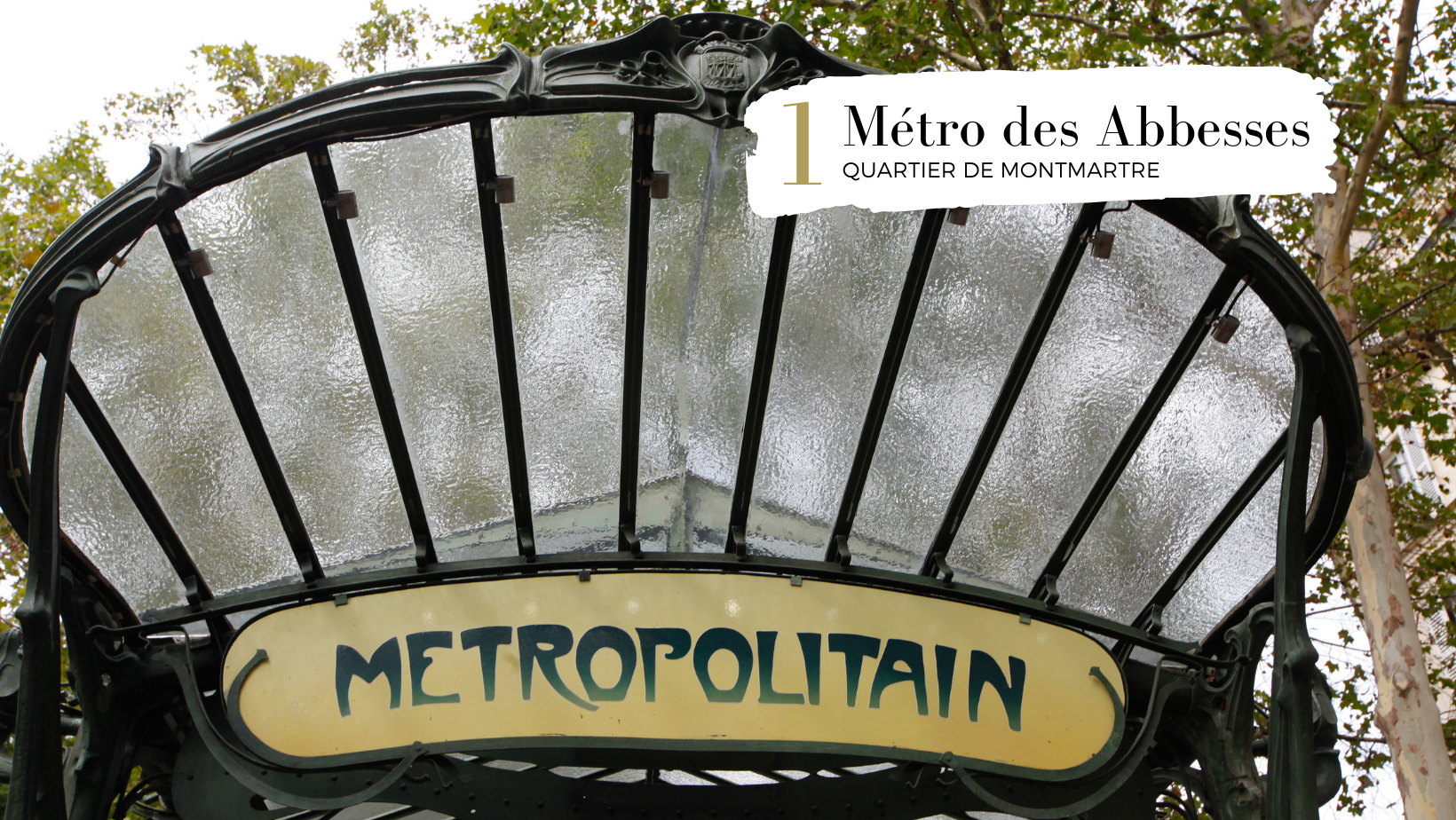 The starting point of your walk is at the exit of the Métro Abbesses. Its name comes from the Place des Abbesses on which the station is located, named in honor of the 46 abbesses who ran the Dames de Montmartre abbey. (To discover a bit of the history of the Abbesses district: have a look at our article here).

The Abbesses metro station is remarkable in many ways. It has the deepest platforms in Paris, you have to go 36 meters underground to take the metro !  Start by observing the Guimard aedicule that adorns its access. Designed in the Art Nouveau style, the aedicula created by Hector Guimard is considered one of the most beautiful in the Parisian network. 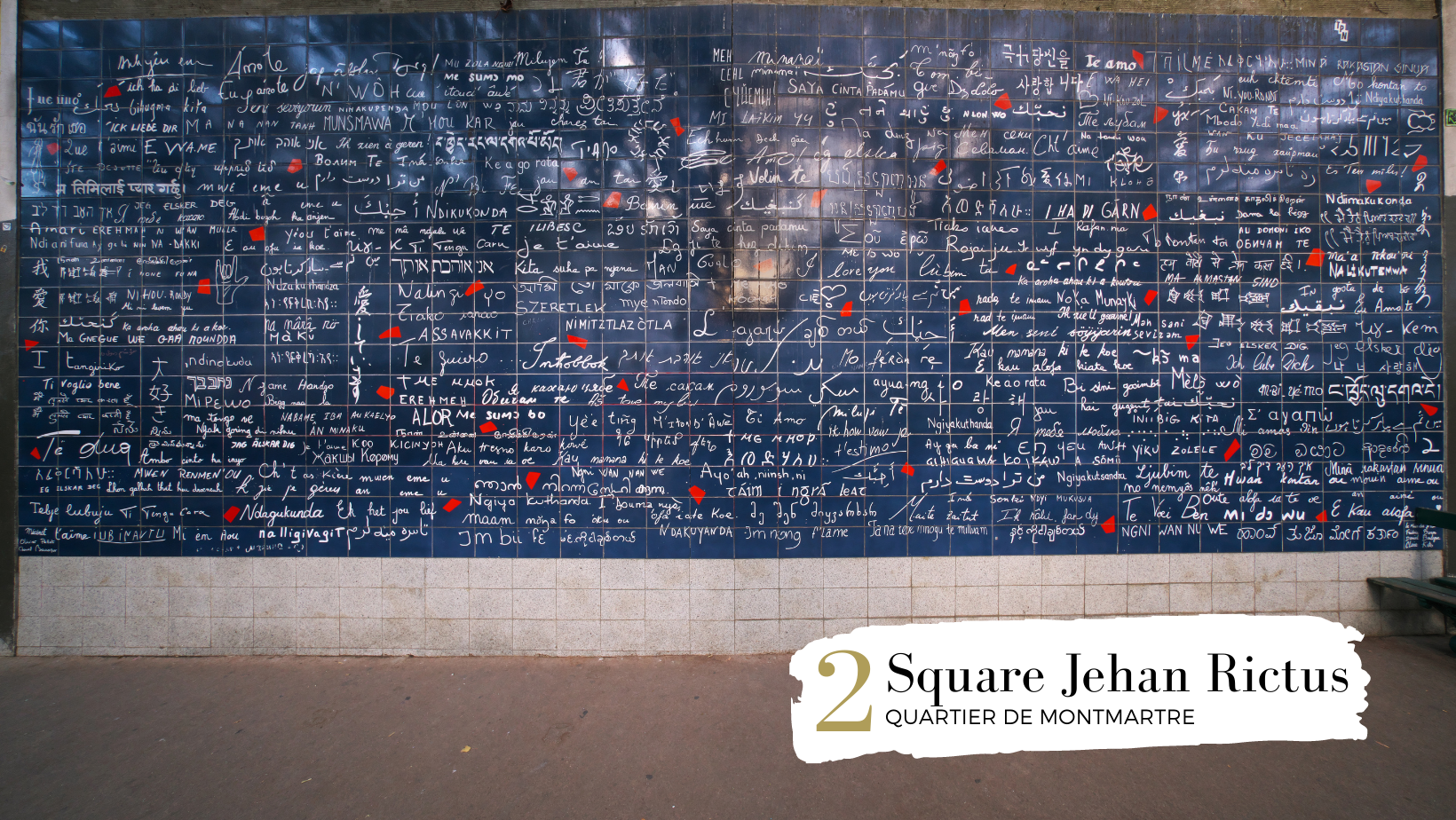 When looking at the aedicula you are facing the Jean-Rictus square. Originally, this was the site of the former town hall of Montmartre where Georges Clemenceau, still a young lawyer, was mayor and where Paul Verlaine was married in 1870.

Head inside the park to contemplate the Wall of I Love You. This work signed by Frédéric Baron and Claire Kito reproduces 311 "I love you" written in 250 different languages, the result of eight years of work.  Friends or even strangers randomly crossed in Paris, Frédéric Baron collects 1500 handwritten declarations on pieces of paper. He then imagines assembling them to cover a wall in homage to love !

Declare your love in an unusual way ! 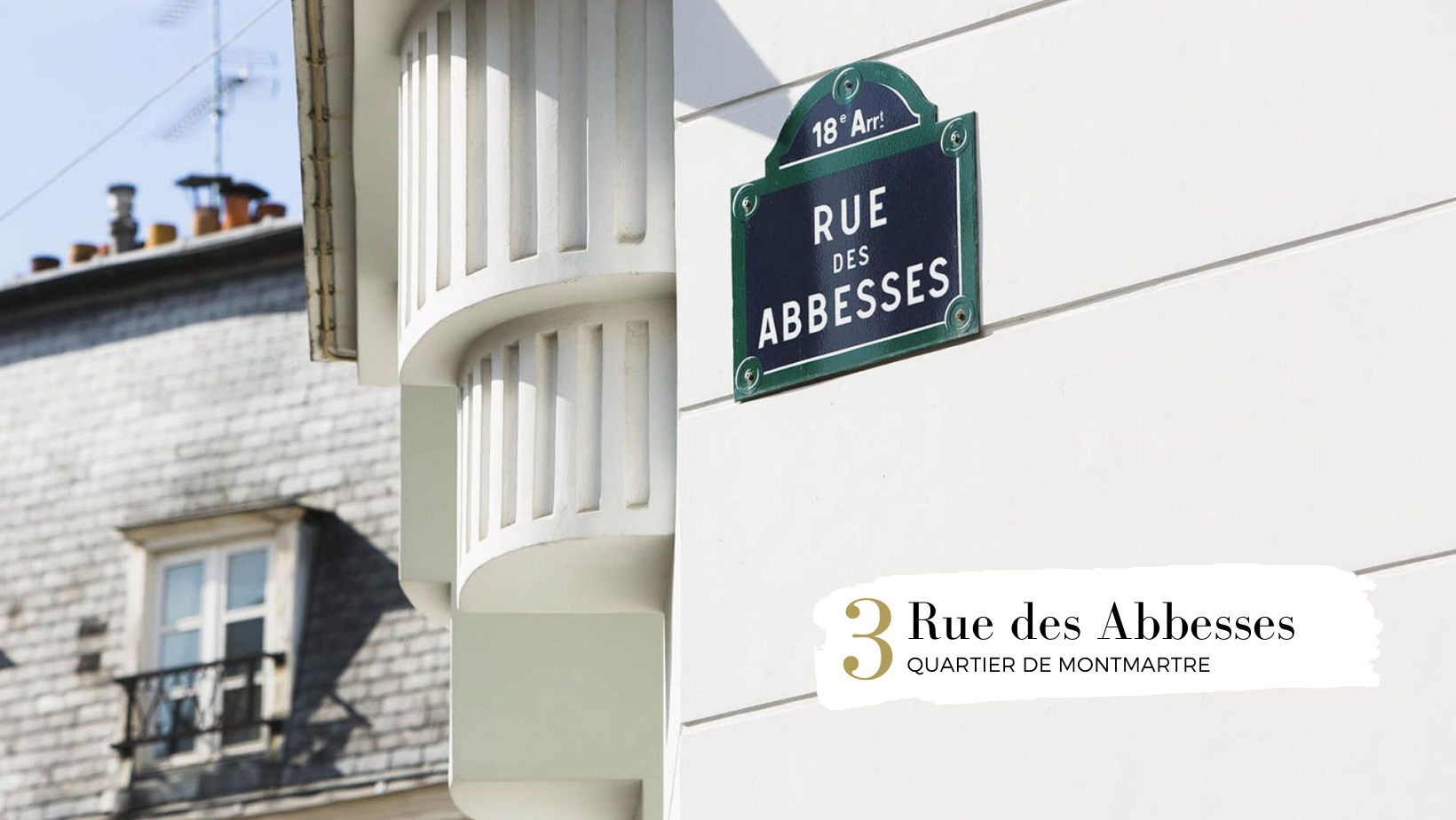 From the place des Abbesses, continue on the eponymous street, this lively street is home to many beautiful restaurants with nice terraces, famous bakers, warm cafés, local shops and luxury stores 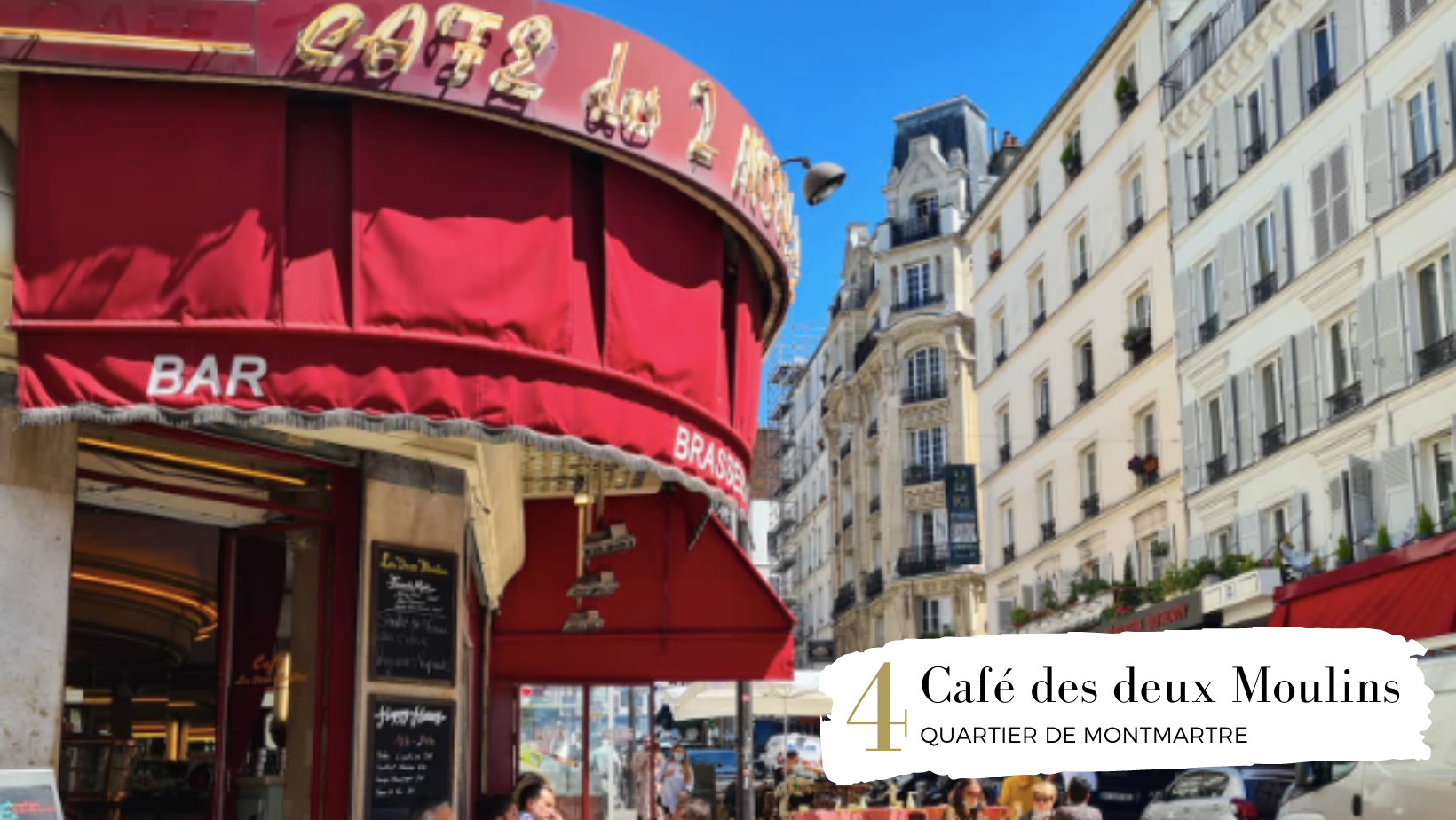 After crossing the shopping street of Abbesses, go down rue Lepic, you will find yourself in Amélie Poulain's neighborhood ! Pass in front of the Café des Deux Moulins, located at 15 rue Lepic, where Amélie Poulain works as a waitress in Jean-Pierre Jeunet's movie ! Typical café of the Montmartre district, its name refers to the two mills located nearby : the Moulin Rouge and the Moulin de la Galette.

Then turn right to join the boulevard de Clichy, you arrive in front of the Moulin Rouge. This mythical cabaret hall attracts millions of spectators every year and is the true symbol of the Parisian nightlife. 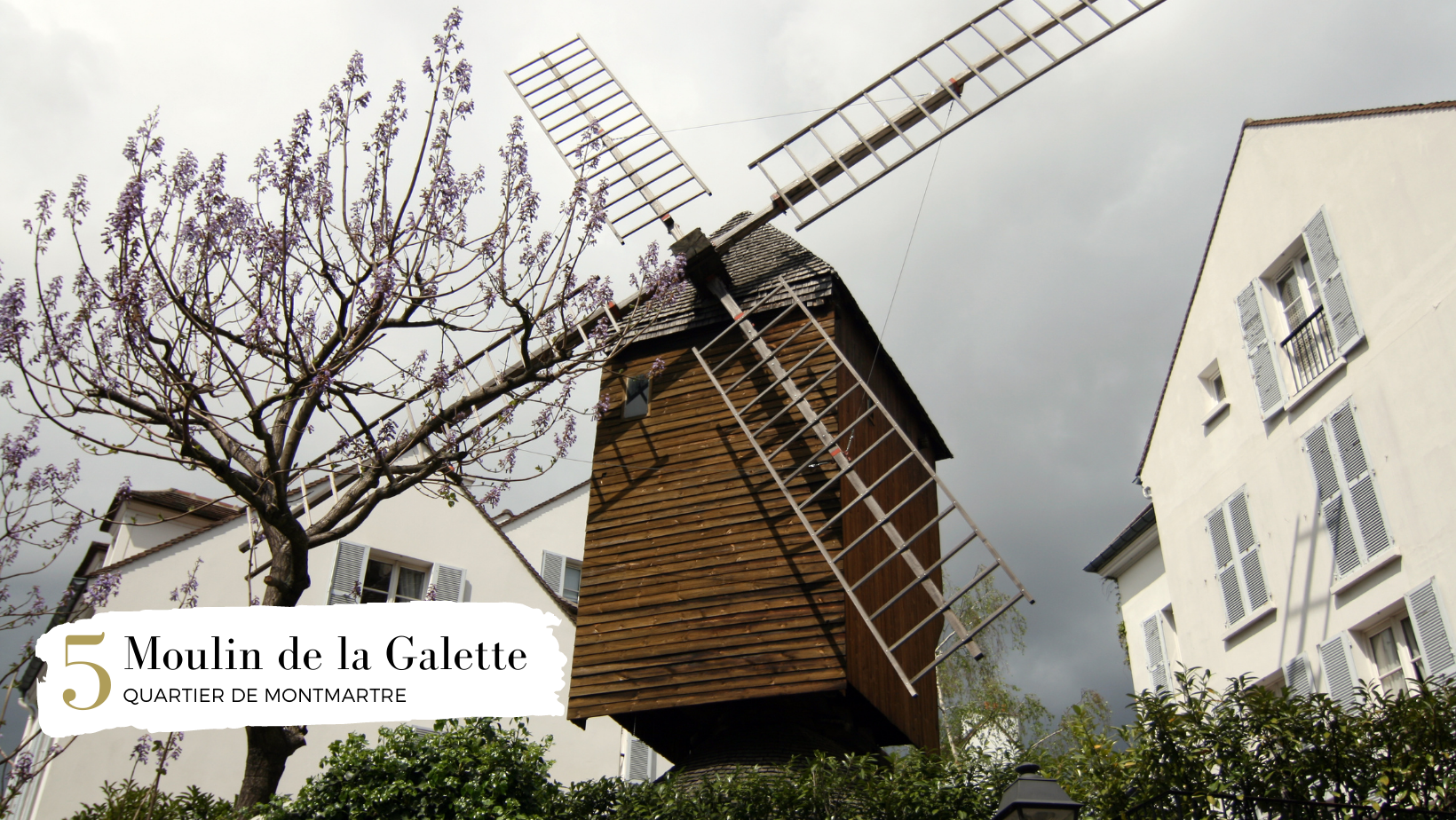 Go up the rue Caulaincourt to join the rue Lepic again. You will meet on your way the famous Moulin de la Galette immortalized by Van Gogh, Renoir, Toulouse-Lautrec, Utrillo... It is the only working windmill of the Montmartre hillock. 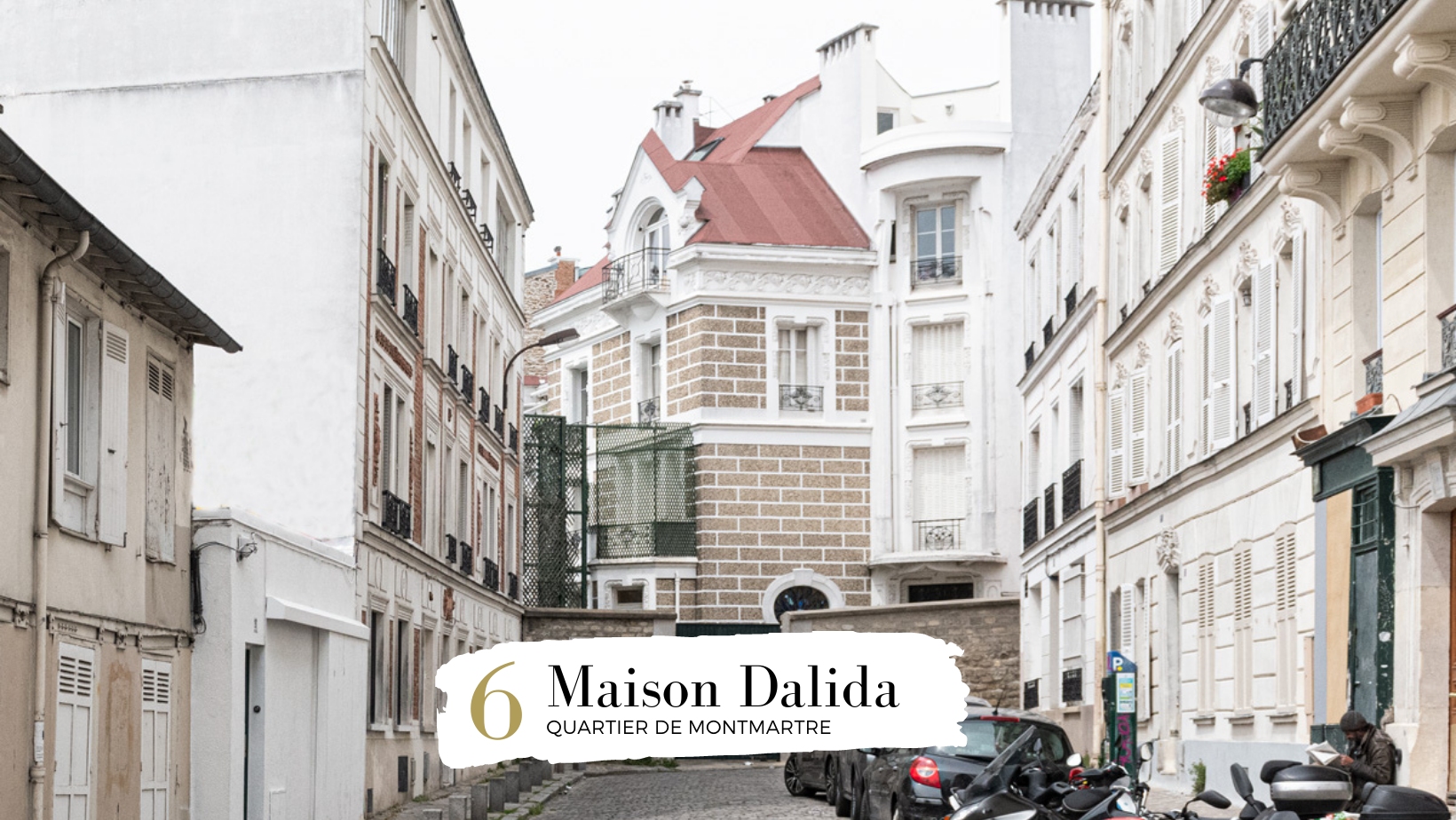 Make a small detour to 11B rue d'Orchamps where you can see an elegant 3-story house that turns out to be the former home of the famous singer Dalida. Today, the artist is no longer there but her memory lives on through the place she lived for a long time. 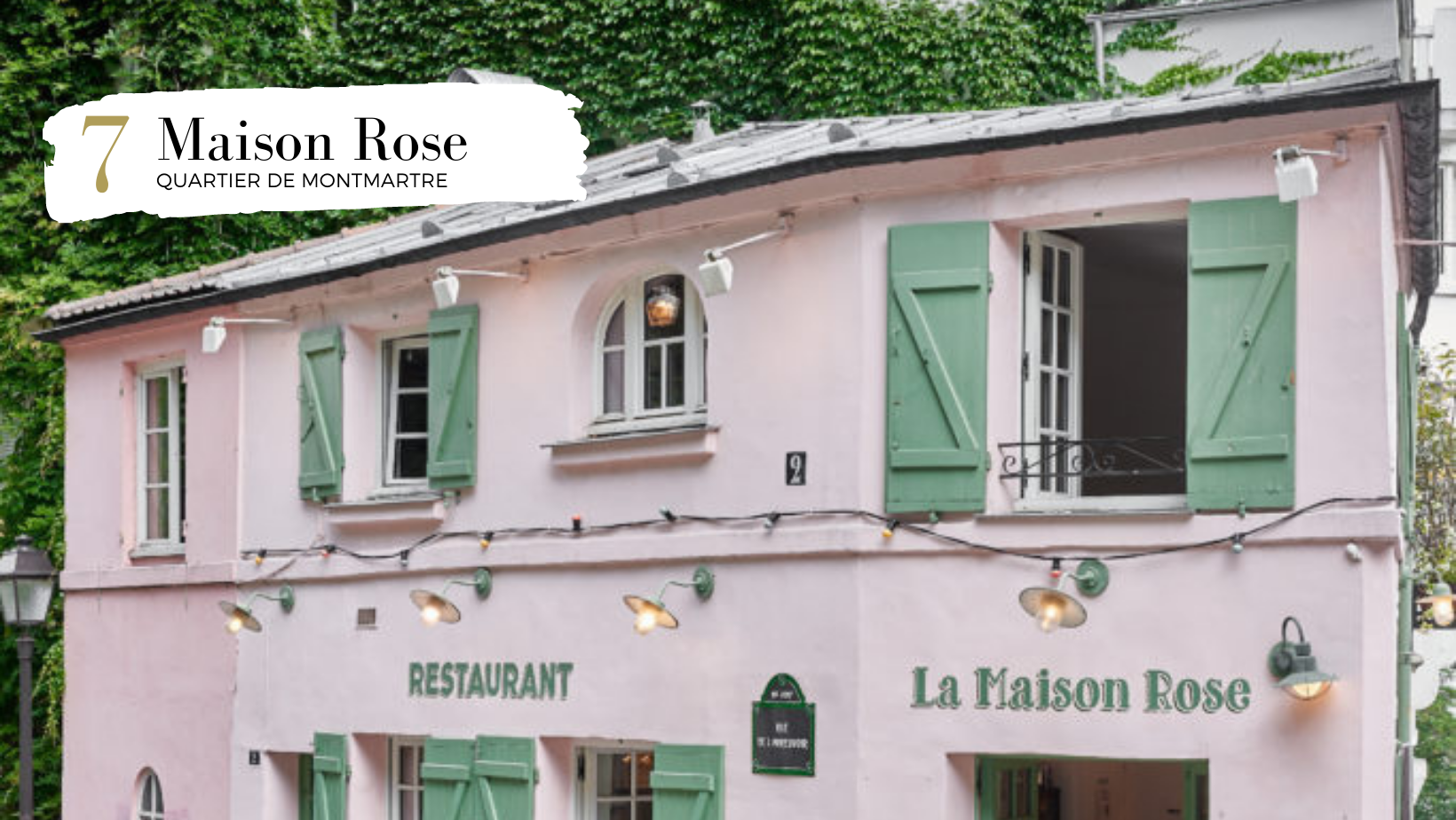 Continue your walk and join the rue de l'abreuvoir, one of the most photogenic streets of the hillock with its Maison Rose. True symbol of the charm of Montmartre, we owe its atypical color to Laure Gargallo, former model of the famous painter Picasso. 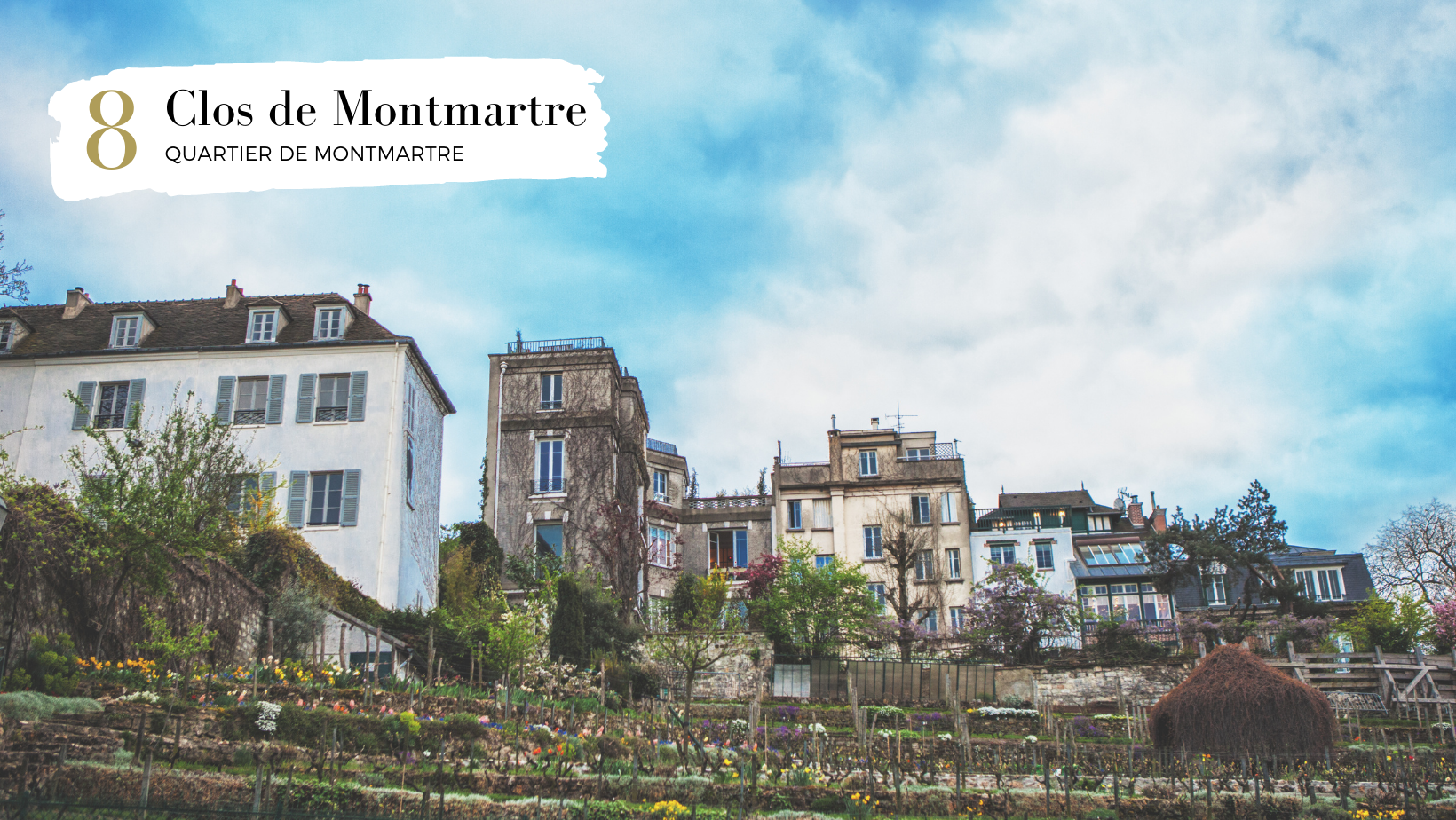 Then, go along the rue des Saules to reach the vineyards of the Clos Montmartre, which reminds you that Montmartre is a real village ! Protected by gates, the vineyards are open to the public every year during the famous festival "La Fêtes des Vendanges". 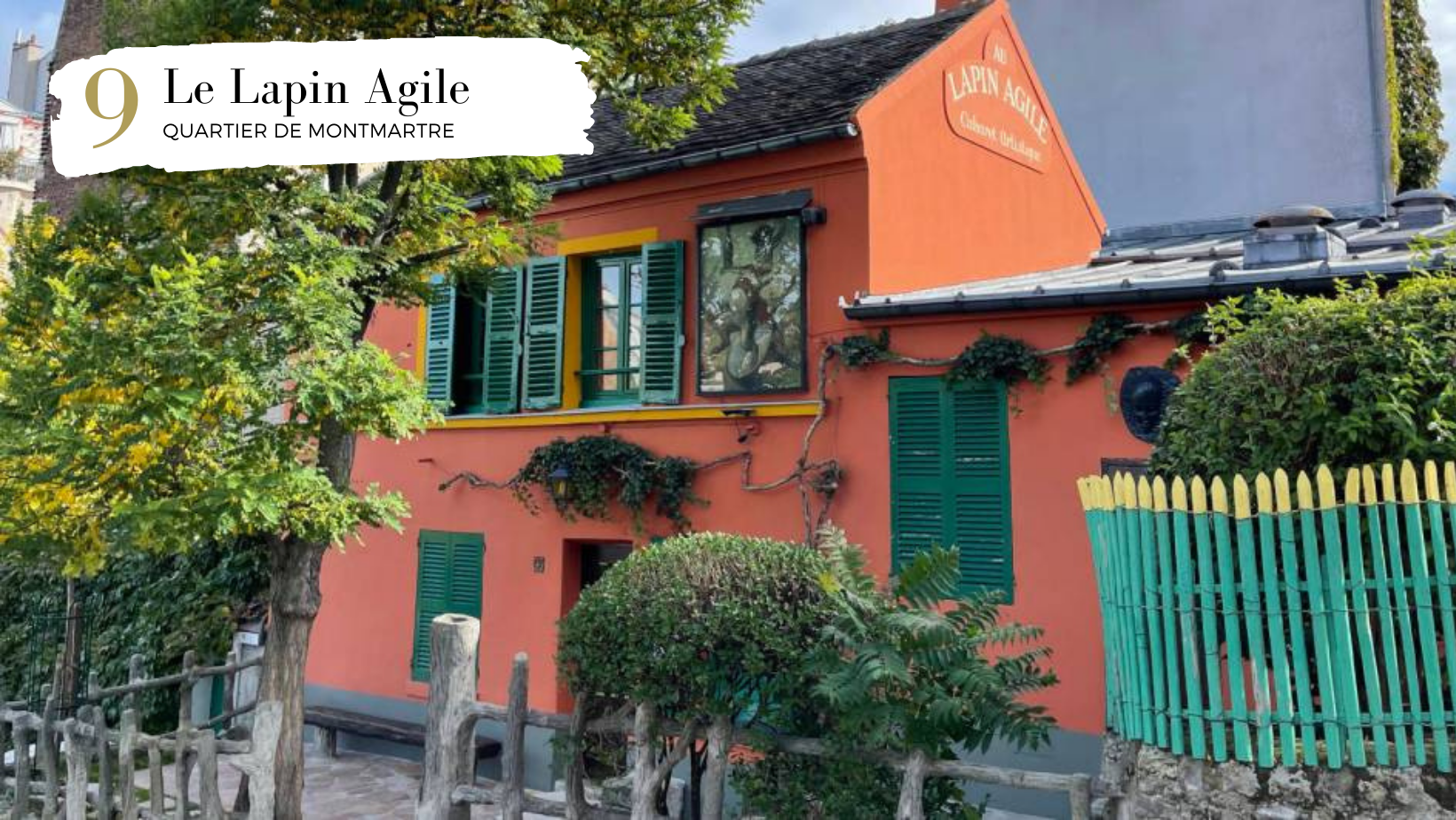 In this same street, a little further, you can discover Le Lapin Agile, one of the oldest cabarets in Paris, frequented by Picasso, Maupassant, Apollinaire or more recently Georges Brassens ! 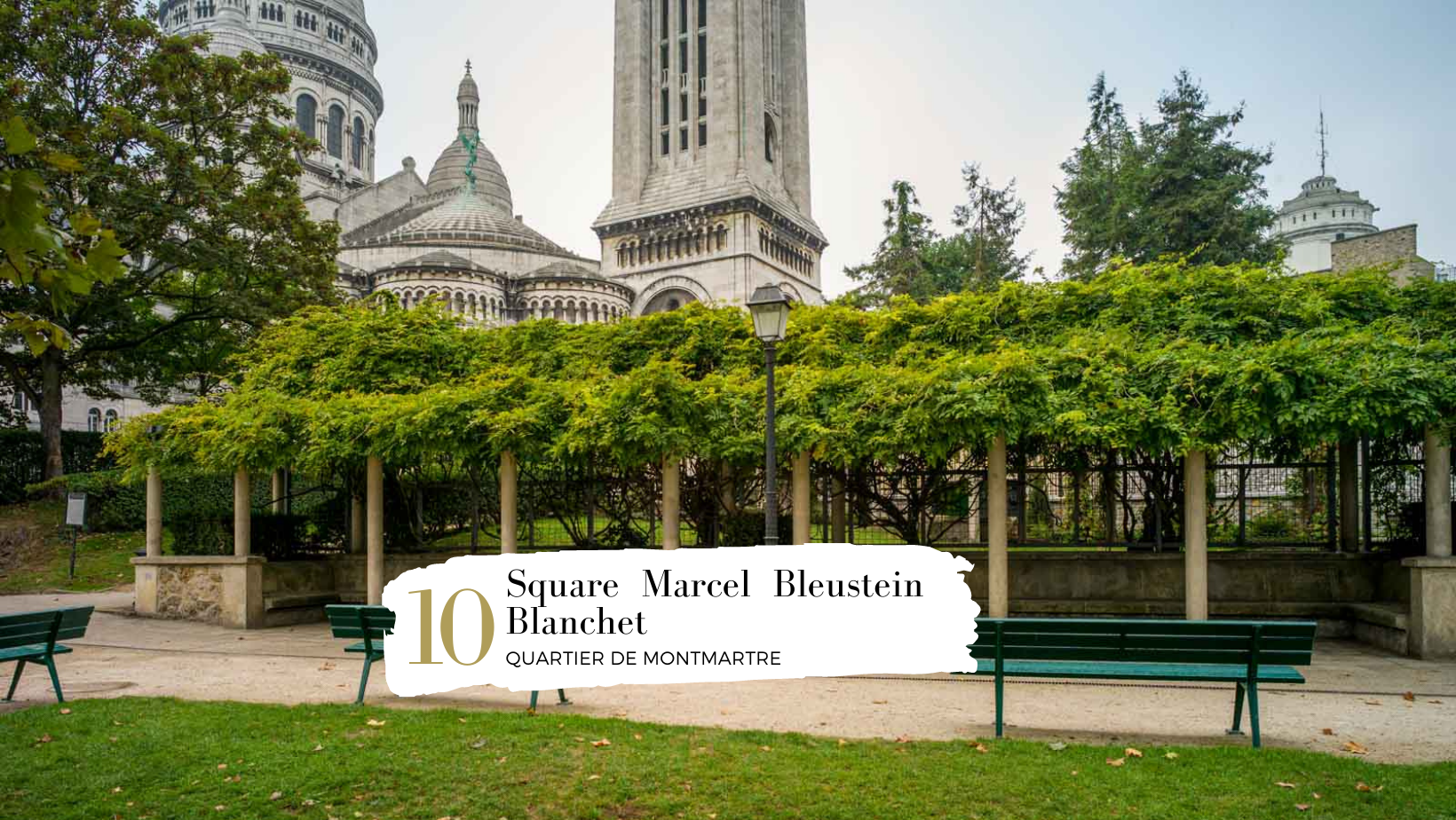 Conclude your walk gently and join the Square Marcel Bleustein Blanchet, continuing on the rue Saint Vincent. This terraced garden, located behind the Basilique du Sacré Coeur, was built on the site of the old Turlure mill which operated between 1770 and 1820. From there, you will have an unobstructed view on the East of Paris. 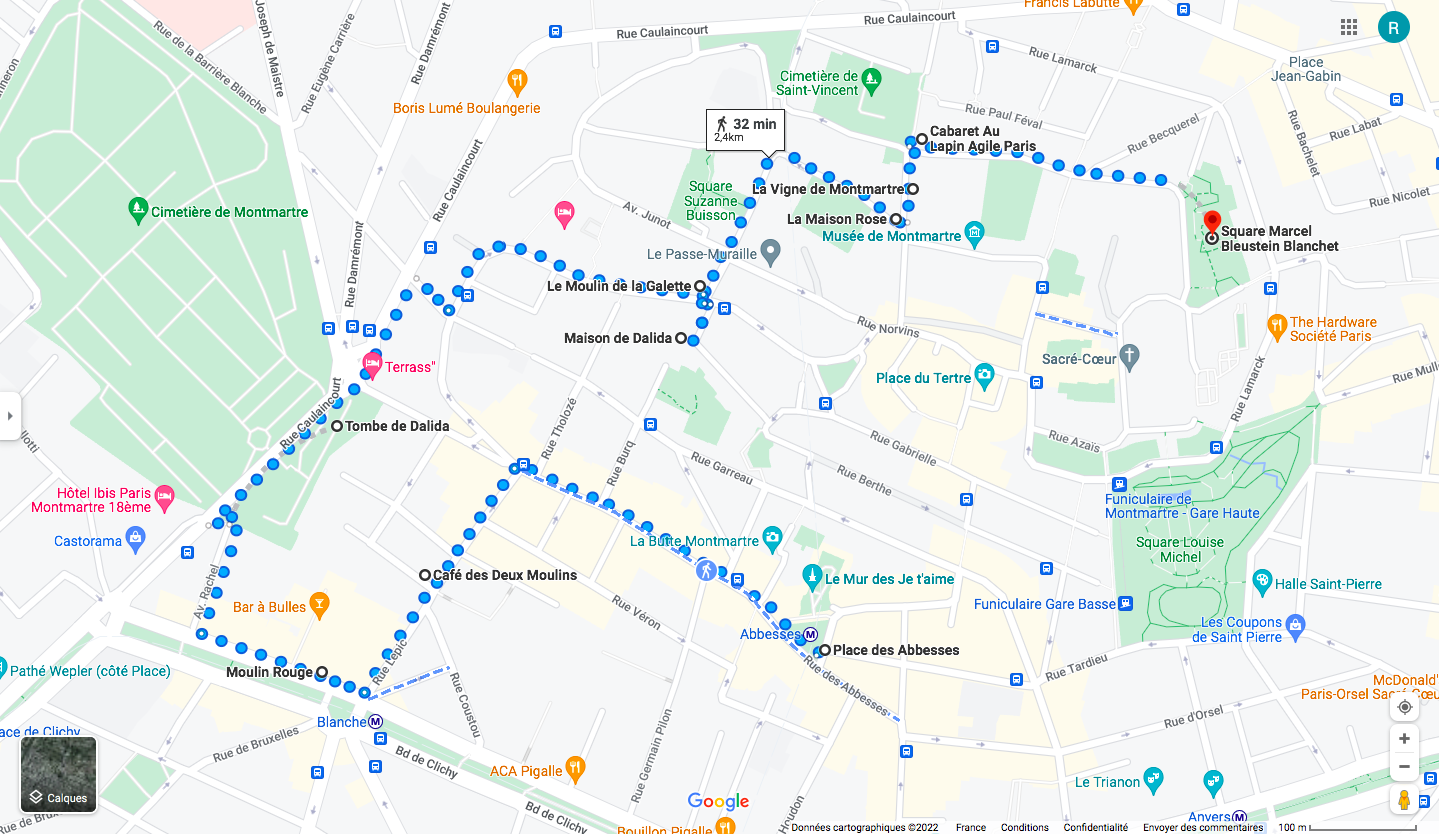